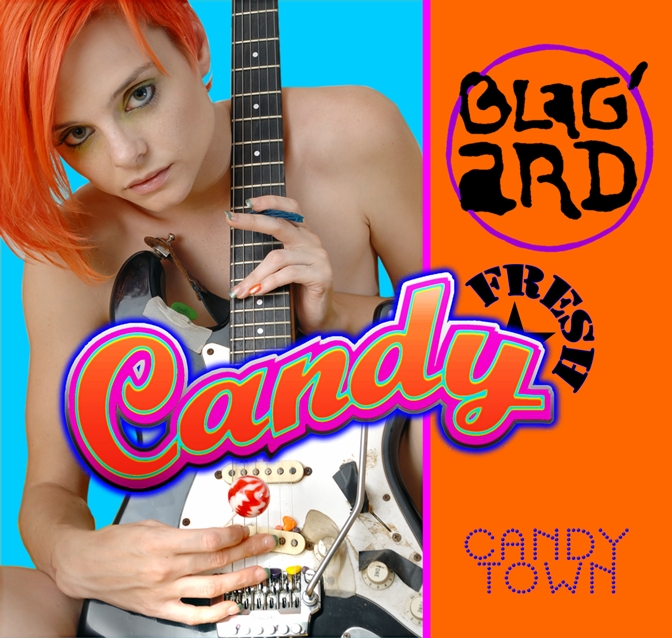 The Nineties were an unusual decade; pop and rock once again started to come awfully close to being the same thing for the first time in years and a gritty, grimy independent release which had been made on a nothing budget had a chance to be the badge of honor that fans wore wore because they found it before “the next big thing” broke through and conquered the world. It was a pretty cool time – and it has come back to life on Fresh Candy, the new album by Blag’ard.

From top to bottom and back to front, Fresh Candy smacks of work made modestly in the Nineties; the artwork on the front and back covers is cheesy and misogynist, the song-titles listed are pretty formulaic and the color scheme is eye-catching only because it is incredibly garish. It’s not pretty – but as soon as the record starts to play, listeners will begin to remember how good some of those modestly made albums could be. Right from the beginning of “Candy Town,” the embryonic days of bands who would eventually become royalty like Local H and Kings Of Leon growl miserably and muffled out of Joe Taylor’s guitar, Adam Brinson’s drums and the vocals supplied by both. It’s hard to not want to fall right back into that old mindset right there, but the band keeps it up and going into “Rusted Chrome” (forget how bad the title is, Taylor’s vocal melody and lines like “If you could shout into the night/ and it would carry on forever/ like a star’s ancient light/ then maybe I would care” are worth the price of admission) just to prove that the band isn’t likely to let this idea go.

From right there, with little to no effort on their part at all, Blag’ard will have listeners eating out of their hands – but they’re only getting warmed up.

From there, songs like “Pony Boy,” “Down South,” “Integrity” and “Scape” keep the alt-rock energy flowing forth straight and true and the band really concentrates on presenting their finest performances. They do a pretty good job at it; the absence of a production value means the band has nowhere to hide so they’re careful not to overreach or produce anything they couldn’t pull off onstage with just one guitar, one drum kit and two voices. That the band seems to know their limitations on this record is refreshing, and listeners will find themselves starting to appreciate the fact that the band seems content to reside in their box, for now.

Despite the “eye candy” on the front and back covers of the CD (naked-girl-holding-a-guitar-that-she-probably-doesn’t-know-how-to-play look), the duo of Joe Taylor on guitar/vocals, and Adam Brinson on drums/vocals, have the cool vibe of Jane’s Addiction, if Jane’s had not gotten humungous egos after their second album, and done mostly mediocre albums after that.

Blag’ard actually down-size Jane’s Addiction huge sound, but not their mojo. “Candy Town,’ “Pony Boy,” or “Tea is for Cookie,” are somewhat off-the-wall-rockers with generous bits of twisted humor for good measure. Fresh Candy has depth and flavor (no pun intended), and they add a few bells and whistles here and there, not only to keep your attention, but to add originality. Fresh Candy is an album that doesn’t slip into tribute territory; this band is the real thing. Blag’ard are able to get to that wildness of rock ‘n’ roll, and marry it to discipline and tradition, making it sound effortless, awe-inspiring, and tight as nails.

Jack Rabid’s Best of 2012 (including over 100 LPs)
Bob Mould, Silver Age
21 January 2013
by Jack Rabid
Now that my “Top 40 Albums of 2012” two-part countdown shows have aired on Breakthruradio.com, and my Top 10 has been officially posted on the Pazz and Jop Poll web site, it’s finally time to share with you all my Top Picks of 2012 List in full.

Review: Blag’ard – Fresh Candy
Published November 16, 2012 Reviews 1 Comment
North Carolina’s Blag’ard offer alternative rock of the strictly “no frills” variety. Just one listen to their songs and you get the picture of a couple of working men taking their frustrations out a beat-up set of guitars and drums. That’s probably not an exciting prospect in itself but the duo of Joe Taylor and cohort Adam Brinson make the best of what they’ve got with their hook-heavy rock sound.

As ‘Candy Town’ starts the album, one can be forgiven that Blag’ard have slowed to a bluesy rock crawl but the cunning twosome soon turn it into their familiar and highly serviceable mix of raw riffage and crafty hooks. If ‘Pony Boy’ seems a little too sombre and lo-fi, there’s much pleasure to be had from the de-tuned guitars of ‘Down South’ and ‘Tea Is For Cookie’ or the infectious tension of ‘Integrity’, whose title alone could be a description of their approach.

For once, Adam and Joe sound a little jaded on parts of this record but to a certain extent musical development is not too applicable to this kind of music. In addition, whilst ‘Fresh Candy’ never tries to break out from the solid formula, in a parallel universe it’s feasible they could be just as famous as The Black Keys.