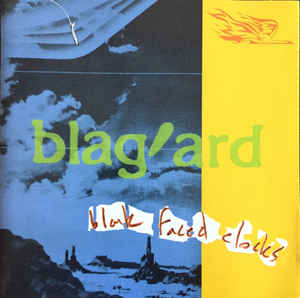 It’s hard to make a rock band with just two band
members but Joe Taylor and Adam Brinson make
quite a racket with this solid EP of brittle indie rock.
‘Monk’ occupies the territory between Pavement’s
guitars and Queens Of The Stone Age’s moody
vocals and on ‘Peaches And Cream’, Brinson
squeals like Placebo’s Brian Molko yet the
music backdrop is deliberately lo-fi and brittle.
‘Losty’ is the duo at their best as a catchy
chorus dominates whilst the riff is perfectly
suited to alternative radio play. By comparison,
‘Friends Like You’ is a decent song slightly
tarnished by some over-reaching vocals and
finally the distinctly slower ‘Jenny G’ is all
sinister slow-building dynamics; consequently
revealing more depth to their oeuvre. Granted,
Blag’ard’s rough-hewn approach won’t endear
them to everyone but their visceral, dynamic
music can be surprisingly infectious.

Ex-Capsize 7 member Joe Taylor is making his own
music now. Although he receives some assistance
from drummer Bill Buckley on the EP, Taylor is the
heart and brains responsible for Blag’ard. Under this
premise, the one man band’s “Blank Faced Clocks” EP
is a heavy guitar-driven recording that remains edgy
and raw by way of its lack of polish and spontaneity.
Taylor puts an unconventional spin on the EP that
works, creating catchy and unpredictable songs with
lively riffs.

This is octave heavy, mid-nineties rock and the
artwork couldn’t be more fitting. Straight out of
Chapel Hill, Bla’gard don’t play wistful alt-country
or generic college rock, which the town became
a hot bed for thanks to Merge records and Superchunk.
Somewhere between Helmet, Bluetip and Weezer,
these boys appear to be having a lot of fun with
the two man band, guitar and drums set up.
Sat at my desk at work today ‘Black Faced Clocks’
sounds awfully refreshing, when 10 years or so ago
it wouldn’t have. This says more about the safe
fumblings of every modern rock band with an eye
on the prize since the Strokes, than about the
band’s concept. British band Distopia are probably
doing a lot more for this (presently rather ropey)
genre of Pavement fans with loud Gibson Guitars
and psycho grins. On the other hand, ‘Losty’ is
perhaps the most ostentatious lo-fi indie rock
song since Urusei Yatsura called it a day.
~“Survivors”, Orlando Goodall

Blag’ard – “Blank Faced Clocks’ (Pigs Zen Pace)
Blag’ard are raconteurs of reductionist rock, although
employing just a single guitar and drums, Guitarist
Joe Taylor and drummer Adam Brinson, project a
fuller sound than many of the skinny legged, mop
headed indie kid bands to whose audiences they
will undoubtedly appeal.

I am a supporter of ‘less is more’; I’d have a band
with just drummers if left to my own devices, so I am
attracted to this minimal set up.

This five song EP peaks at track three ‘Peaches In Cream’,
with one of the most inventive guitar riffs I’ve heard for
a while, strings like slack elastic bands distort and stagger
the tempo while the drums syncopate stutteringly behind
a oddly asexual vocal.

There are similarities between Joe Taylor’s voice and
Brian Molko of Placebo, but less whiney and with only
half the mascara.

This band seem to have concentrated their activities close to
their Chapel Hill, NC, USA home but should they come this
way they would find a ready audience for their brand
of guitar based lo-fi rock. I’d check them out if they ever
come near to my country retreat.
-Dee Generate celebrity reviewer for Trakmarx
www.trakmarx.com

BLAG’ARD “Blank Faced Clocks”
CD Unusually when I get stuff
out of the blue like this, it’s bad… but this time (at least)
it’s pretty impressive. Impressive and catchy. Impressive, catchy
indie rock. Great sounding guitars and good vocals with some
strong, desperate, but also driving lyrics. Sounds good and I am
curious because there is talk that this guy is a one man thing…
I cant imagine that being as good as on CD, but I would give
it a shot…I imagine if some sorts of virus struck musicians,
and only musicians,BLAG’ARD would be one of the survivors
and replace something that has a hold on everyone now with
their own brand of sonic awareness.
-Shawn Abnoxious

There’s something weird about this duo, because while I
was listening to it originally it was UK indie names that
were going through my mind, from The Three Johns to
Diatribe, to Wedding Present and Disco Students. Not
what you expect from an American duo, but then maybe
Joe Taylor and Bill Buckley are unusual men. In fact it’s
really singing guitarist Joe, as drummer Bill was called in
to help with the EP.

‘Monk’ finds Joe yelping strongly about being the
loneliest man ever, over surging backing vocals in a very
simple song; so simple it’s absurdly catchy. ‘Losty’ is
friskier, with friction between the guitar chiming fast and
drums being politely supportive. ‘Peaches In Cream’ is
like apocalyptic lo-fi glam, if you can imagine crossing
Placebo with Jon Spencer Blues having a breakdown?
Quite the little stormer.

‘Friends Like You’ has, â€œwith friends lie you who need
strangers?â€� which is a good line, over more concise,
linear guitar guile, then ‘Jenny G’ is calmer, with
stamping drums and cutely gracious guitar, over which
angst-ridden melodic vocals spill out. The song staggers
boldly along and starts shuddering with verve towards
an audacious end, although it does get unnecessarily
weird and ugly too.
An unexpected thing, and quite intriguing.
~THE MICK 30, December 2006

We have become so inundated with digital recording,
it is very difficult to remember what music was
like before quality recording became cheap,
effectively moving musicians out of the raw,
dungy garage. Blag’ard is a throwback. Maybe
Blank Faced Clocks was recorded digitally, but
Joe Taylor and Bill Buckley definitely bring the
dirty, plodding, idle rock that I remember seeing
with ten other androgynous individuals in Buddy Holly
specs ages ago. The beer-soaked sound system weighs
about 700 pounds, but only cost $75, the sound board
badly needs its pots cleaned, but no one will ever
care enough to clean them, and the basement floor is
damp enough to shock Joe and Bill if they accidentally
touch their lips to the mic. This is Blank Faced Clocks;
an album designed for those who seek the hidden.

“Monk” is the perfect beginning to such a departure.
The tempo is so retarded, and the distortion so past
its proper peak, the music sounds like early metal,
or early Polvo. The chorus, which asks, “Would you
like to get to know the loneliest man ever”, should
be a mantra for this band. The loneliest band ever.
The vocals sound a bit overdramatic, like Ween, but
if this can be overcome, “Monk” is solid. The vocals
temper a bit during “Losty”, while the tempo jumps,
which results in a rocking romp. This masterpiece is
also where the “Blank Faced Clocks” reference is found;
emblematic of where this track fits in importance to
the 5-song EP.

In “Peaches In Cream”, there is a guitar line, full of
bending strings, during the verse similar to Built to Spill.
The sexuality of the lyrics, wrought with frustrating
images and guilt, put this in line with Sebadoh’s
“Homemade”. Musically, throughout the EP Blank
Faced Clocksis pretty consistent. The guitars keep a
solid beat, while the guitar is distorted in such a way
that chords are thick to a muddy degree, though
individual strings are piercing (reverb).
Lyrically, the EP is a bit more dynamic, at points
masked in imagery, while other moments bring simple
brutality. One of the latter moments arrives on “Friends
Like You”, where the witty “What’s not the opposite
is true”, is followed by the stark, “With friends like
you, who needs strangers.”

Blag’ard is straightforward indie rock (although my RealPlayer
is telling me it’s Art Rock), but the stork who was sent
out with this baby got sidetracked for more than a decade.
Regardless of the time trap, Blag’ard is beauty in all
its ugliness.
~Patrick Muldowney, ANTImusic

Joe Taylor is the mastermind behind Blag’ard,
which is essentially a one-piece band. However,
on Blank Faced Clocks he is assisted by the
drumming skills and backing vocals of Bill Buckley.
The album was recorded in North Carolina and put
out by Joe’s own label, Pig Zen’s Pace.

The rawness is ever-present throughout the 5-song EP,
yet it doesn’t hamper the quality or the opinion of the
album. In fact, it may even be asset, setting
Blag’ard apart from the pack of singer/songwriters.
The beginning track ‘Monk’ , a well spliced, spacey
piece which gives ample time to reflect on the
ambient sounds. The second track ‘Losty’
more straight-forward rock song, showing that he
can cut to the chase and just rock out. The middle
piece is a great number entitled “Peaches in Cream”
showing a stranger, more off-key side to the tunes,
driving hard to the point that variation is a key
factor on this album. “Friends Like You” is a great
song, likely my favorite on the album. It showcases
some nice guitar work with what is my favorite vocal
line on the album when he begs the question,
‘With friends like you/ who needs strangers?’
The final song, ‘Jenny G,’ is a nice closing to
the album, though pegging love-lost stereo-types.

All in all, I was pleased with this album but not
blown away. The potential of Joe Taylor is undeniable:
the combination of his skillful guitar playing, song
writing and unique vocal work are all strong assets.
Hopefully Blank Faced Clocks will have enough
momentum to fuel his musical passion into the horizon.
~Josh Hogan
josh@orchidscurse.com